Premise: the role of metropolitan systems in addressing and fulfilling SDGs is crucial. Limited are the tools to directly link strategic physical planning and design actions with the sustainable global agendas.

Objective: the METROGAME is based on preliminary work made by experts as facilitators providing scenarios of negotiation to be improved, modified, implemented by different actors through decision making processes the game will simulate these decision making processes in reduced complexity showing the effects on SDGs and other urban indicators in terms of expected results. The game is based on a preliminary mapping and design phase on the focus area delivering a strategic framework that should include and recombine existing and potential public/collective/common assets as enduring and viable metropolitan and urban patterns contributing to set a possible robust structure of sustainable development. A metropolitan framework of civic robustness is a strategic, inter- scalar, multi-actor, spatial platform of negotiation for the coproduction of public good.

The METROGAME allows to interact with the metropolitan strategic framework and its patterns by improving, modifying, implementing them according to a personal perspective, with the aim of reaching the highest balance in the proposed indicators of sustainable development.

Each group will have a game set including the game board and: 9 Roles Cards 12 Action Cards 2 Scoring Tokens.At the beginning of the game role cards will be distributed. The mayor will be elected and he will be the active player, while the others will play the parts of the actors suggested by the roles card, sustaining the suggested positions.

Metropolitan context and issues: Wazico is a fictional intermediate city with tropical climate, part of an emerging metropolitan system. The new national railway has just been planned and will push a rapid urban growth, triggering metropolitan dynamics, even due to existing administrative boundaries and geographical constraints to urbanization patterns. Unfortunately still no metropolitan or supra-local authority has been set up to manage this process.

In Wazico some projects to drive future urbanization have already been started, as the national government has decided to invest in the city and financial resources are available due to the progressive foreign private investments, but various urgent issues still require the attention of decision makers. The goal of the game is to set a sustainable scenario for Wazico in which the Local Goals on urgent needs and the Global Goals related to SDGs are balanced. 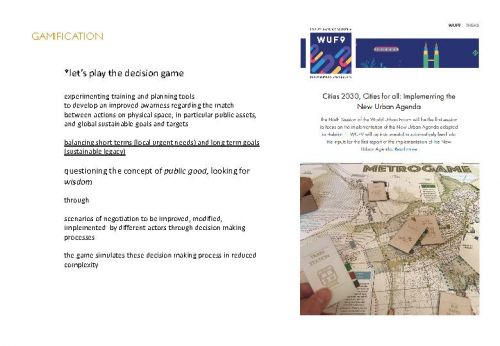 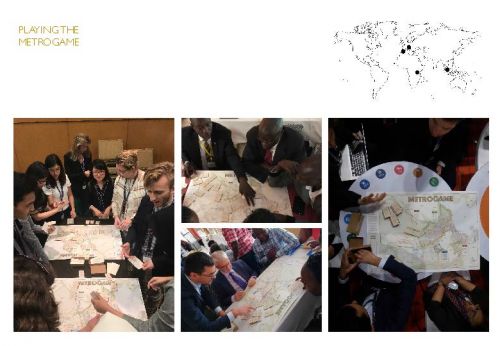 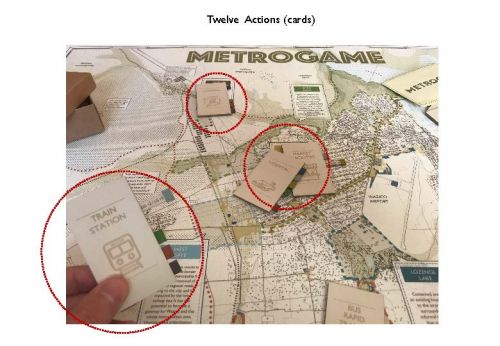 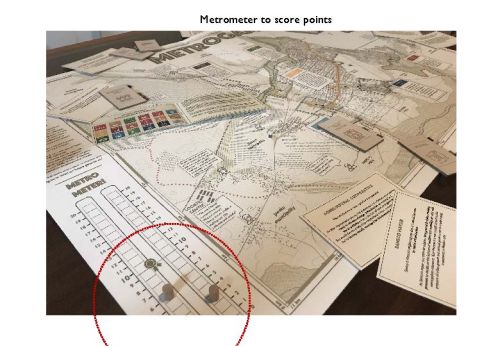