The climate is changing. Global mean temperatures are rising, resulting in an increase in heat stress, especially in urban areas. It is predicted that in the Netherlands, the amount of precipitation will increase, and that rains will be heavier (KNMI, 2006, 2010). Because of that, unless measures are taken, flooding will occur more frequently.

Many municipalities are aware of these changes and feel the urgency to take measures to adapt. However, climate adaptation is not the only a responsibility of the municipality. And even if it was, they do not have the resources necessary to take the required measures on their own. They are dependent on other actors; stakeholders in the area that have ownership of land and properties, or who have the resources to take measures. This makes the assignment more complex for the municipality. How to prioritize between objectives, and who should be included in your plans? In the Climategame, the challenge is to find a way to deal with the effects of climate change, and increase the livability together with other stakeholders in the area.

The Climategame simulates a university area where multiple stakeholders each have multiple objectives. The municipality has to improve a residential area, constructed in the 60s, and increase the livability of the entire area. The waterboard’s task is to adapt the water system to avoid flooding due to increased rainfall, now and in the future. The project developer, Uni Real Estate, needs to improve and expand the university’s educational facilities so that it can handle the increasing amount of students who will enrol in the future. Lastly, the Social Student Housing has the objective to realize new housing for students. All of these high-level objectives need to be realized with scarce resources, particularly because the area’s fit for new developments is limited. Communication and collaboration are vital to find an optimal solution and complete all objectives.

Tygron is the proud developer of the Climategame. They have created their own Geodesign Platform that has been used to build the Climategame. The Climategame is based on an actual use case in Delft and was successfully used by the involved stakeholders to overcome their conflicting goals in this planning project. Nowadays, the game is mostly used by educational institutes to provide students with a fun and realistic test case which fits lots of learning objectives. Over 30 universities worldwide make use of this game. The game is so popular because it is a perfect example of how a co-creation implemented in a project during the creation of the game as well as during the game itself. In real life, the involved stakeholders are depended on each other and in the game, you cannot escape that given fact as well.

FE: In the 3D world, you can take actions to adjust the university campus, but you will need to ask permission from another stakeholder before you can actually perform the action. 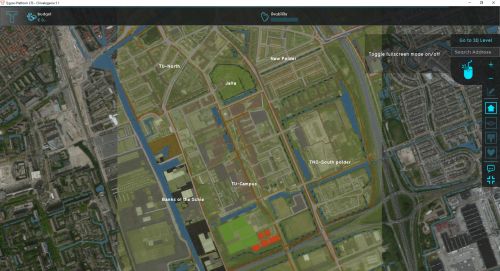 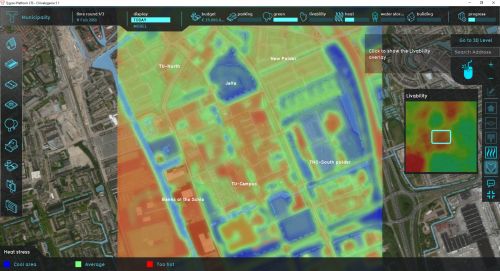 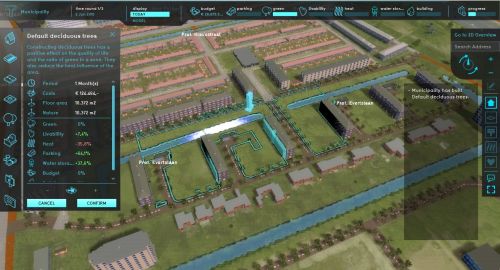